While due care has been taken to ensure the accuracy of the information contained herein, no warranty, express or implied, is being made, by Agarwal & Dhandhania as regards the accuracy and adequacy of the information contained herein. The information in this material is not intended to constitute accounting, tax, legal, investment, consulting, or other professional advice or services. The information is not intended to be relied upon as the sole basis for any decision which may affect you or your business. Before making any decision or taking any action that might affect your personal finances or business, you should consult a qualified professional adviser. None of Agarwal & Dhandhania, its partners, analysts or staff shall be responsible for any loss whatsoever sustained by any person who relies on this material.

This material is intended only for the use of the clients and for the firm’s personnel only and the entity/person to whom it is addressed and the others authorized to receive it on their behalf. The recipient is strictly prohibited from further circulation of this material. If you have received this communication in error, please notify us immediately by responding to this email and then delete it from your system

This booklet is not an offer, invitation, advertisement or solicitation of any kind. It is purely intended for our clients and for private circulation only.

The Finance Minister presented the budget for 2010-11 when the fiscal 2009-10 is ending with a remarkable recovery and clear indications of vibrant economic rebound. He budgeted a lower fiscal deficit of 5.5 percent of GDP for the next fiscal, against the budget estimates of 6.8 percent for this fiscal and promised to lower it further to 4.8 percent and 4.1 percent over the next two years. This lower deficit is more due to expenditure compression, especially non plan expenditure with only a 6% increase (adjusted for inflation), which is hardly anything. He appears to be on a responsible fiscal policy path, which has greatly enthused foreign investors. This is the main reason why we saw the stock market shoot up after its all these regular proposals. It is happy to note that though fiscal 2009-10 began amid a sense of despondency, gloom and uncertainty but ending with sense of confidence. Following the impact of global financial crisis on Indian economy after 2007, thirteenth Finance Commission recommended a gradual and partial rollback of stimulus measures, which was expected to be resulted in hike in indirect taxes in the budget and that is what budget confirms.

The FM said in previous budget that tax reform is a process and not an event. Continuing the same, this budget, he has outlined the process by assuring roll out Direct Tax Code in direct taxation and GST in indirect taxation from April’ 2011. Proving this budget, as he said, belonging to “Aam Admi”, the farmers, the agriculturists, the entrepreneurs and the investors, he has proposed to broaden tax slabs for mid class (to benefit 60% of tax payers), to encourage R&D, to declare 46% of the plan allocation to infrastructure, to simplify FDI regime, to give additional banking licenses to private players/NBFC, to announce 5 more mega food parks, to double plan allocation for Power and further disinvestment.

The Finance Minister will have a challenging task as he deals with DTC & GST. Rising Inflation not much addressed, which will adversely affect assumed Fiscal Deficit. It remains to be seen the relative reliance placed on Direct and Indirect Taxes in order to sustain the economic growth and requiring relevance for large scale spending on social and educational sector.

He had the daunting task to quickly put the economy on the high GDP growth, contain inflation, ensure food security and bring down the fiscal deficit. For this, he has to impart fresh momentum into the economy; he did so with certain innovation and with a broad brush. The Finance Minister rightly quoted the following words of Kautilya ;

“Thus, a wise Collector General shall conduct the work of revenue collection…. in a manner that production and consumption should not be injuriously affected…. financial prosperity depends on public prosperity, abundance of harvest and prosperity of commerce among other things.”

Overall this budget aims to spur the growth with emphasis on welfare, women and child development, green revolution in some northern and eastern states, conservation of soil fertility and environment, non-conventional energy, dry land agriculture, water harvesting and watersheds. It is a growth-oriented, rural-development budget. It sustains growth and brings about a measured fiscal consolidation.

It has always been endeavor of Agarwal & Dhandhania to provide you with timely updates on economic and legal initiatives and developments affecting Trade and Industry. The Union Budget is one such statement of Economic Policies pursued by the Government.

For the last couple of years, we make all-out efforts in compiling and analysing Budget Proposals for providing its panoramic view to our Readers within 24 hours of its presentation by The Finance Minister in Parliament.

We trust, you shall find this Booklet very useful for reference and record. We welcome your valued Inputs for our continual improvements.

Email us your feedback and queries at : (sanjay@adcaindia.com)

Defying all the apprehensions Economic Pundits predicted in April’2009, the year 2009-10, as a whole, has posted a remarkable recovery not only in terms of overall economic growth figures but in terms of fundamentals also. Outlooks at the start and at the end are totally different. The pre-budget Economic Survey (2009-10), presented by The Finance Minister Pranab Mukherjee in Parliament on Thursday predicted that India would bounce back to a high nine per cent growth in 2011-12 and possibly will become world’s fastest growing economy in just four years.

The survey warned that high food prices would rise further over next few months and it has held the food management policies responsible for the high prices of items like sugar. Food inflation is at present hovering close to 18 per cent. The Economic Survey 2009-10 recommended a “gradual rollback” of stimulus measures after carefully assessing its impact on each sector.

The Year in Retrospect

Year 2007 witnessed beginning of financial crisis in the industrialized nations, which spread to the real economy across the world. It was further followed by a significant slowdown in the growth rate in the second half of 2008-09. The growth rate of the gross domestic product (GDP) in 2008-09 was 6.7 per cent, with growth in the last two quarters hovering around 6 per cent. The fiscal year 2009-10 began as a difficult one. Inevitably, India’s fiscal deficit increased from the end of 2007-08, reaching 6.8 per cent (budget estimate, BE) of GDP in 2009-10. A variety of stimulus packages were put in place in the second half of 2008-09, in the Interim Budget 2009-2010 and, again, three months later, in the main Budget 2009-2010. A delayed and severely subnormal monsoon added to the overall uncertainty. The continued recession in the developed world, for the better part of 2009-10, meant a sluggish export recovery and a slowdown in financial flows into the economy.

However the real turnaround came in the second quarter of 2009-10 when the economy grew by 7.9 per cent. As per the advance estimates of GDP for 2009-10, released by the Central Statistical Organization (CSO), the economy is expected to grow at 7.2 per cent in 2009-10, with the industrial and the service sectors growing at 8.2 and 8.7 per cent respectively. This recovery is impressive because of the following reasons.

At the year’s end, it is good to see India having averted a recession and come out of the slowdown faster than predicted and an analysis of various statistical trends that gird the economy suggests that the nation’s medium- and long-term prognosis is excellent. If we can put into effect some important structural policy measures, there is no reason why India cannot achieve double-digit gross domestic product (GDP) growth and a rapid diminution of poverty. The growth rate of India for last 5 years is depicted in figure -1.

The manufacturing sector has grown at the rate of 8.9 per cent in 2009-10. Growth in the major industrial groups has been a mixed bag. There was strong growth in automobiles, rubber and plastic products, wool and silk textiles, wood products, chemicals and miscellaneous manufacturing; modest growth in nonmetallic mineral products; no growth in paper, leather, food and jute textiles; and a slump in beverages and tobacco products in 2009-10.

The service sector which has been India’s workhorse for well over a decade has continued to grow rapidly. It comprises the sub-sectors trade, hotels, transport and communications; financing, insurance, real estate and business services; and community, social and personal services. As against a growth of 9.8 per cent in 2008-09 it grew at 8.7 per cent in 2009- 10.

Contribution of various sectors in GDP of India is depicted in Figure-2. 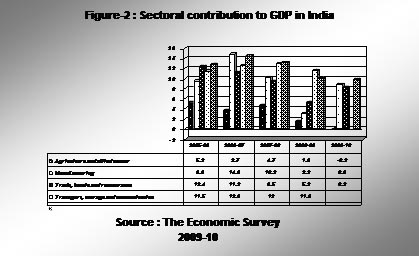 Behavior of Prices and Inflation 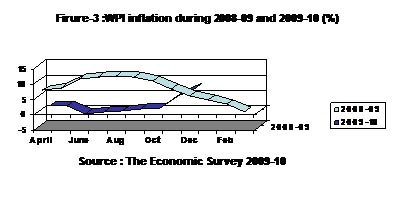 Given the uncertain global context, the Government did not fix an export target for 2009-10, instead the Foreign Trade Policy (FTP) 2009-14 set the objective of an annual export growth of 15 per cent with an export target of US$ 200 billion by March 2011. With the deepening of the global recession, the beginning of 2009-10 saw acceleration in the fall of export growth rate. The upwardly revised export figures for the first half of 2008-09 also contributed to the faster decline in the growth rate. While the export growth rate was a negative 22.3 per cent in April-November 2008-09, in November 2009, it became a positive 18.2 per cent after a 13-month period of negative growth.

The tax slabs are proposed to be broadened to benefit not less than 60% of the tax payers. The major benefit goes to the middle class people. The budget says a loss of revenue would be Rs. 26000 cr by this move. Additional amount of Rs. 20000 made available for deduction, increasing TDS limits in various payments, promoting hotels/tourism, increasing benefits to pay for research & development and clarifying provisions for LLP are some major reforms in direct tax proposals.
Rates of tax
Tax rates for Individual/ HUFs/ Non Residents/ AOPs/ BOIs

30% of the Total Income
Tax rates for Co-operative Society

30% of the Total Income
No surcharge shall be levied in case of persons mentioned above.
Tax Rates of Domestic companies

30% of the total income plus 7.5% surcharges on tax payable if total income exceeds Rupees One Crore.
Tax Rates of Companies other than Domestic Companies

40% of the Total Income plus 2.5% surcharges on tax payable if total income exceeds Rupees One Crore.

Commissioner can cancel registration of trust registered under Section 12A

Profit Linked deduction under chapter VI A now extended to Hotel sector too.

Pipe line capacity for common carrier to be as per regulations of Petroleum and Natural Gas Regulatory Board.

Amortization of expenditure on VRS applicable to converted LLP too

Definition of “Actual Cost” in case of LLP

For converted LLP, actual cost of block of assets is “WDV” of predecessor

Computation of profits and gains of business of exploration etc. Of mineral oils

Computation of income by way of royalty etc. In case of non-resident

any of the condition in proviso to section 47(xiiib) (Refer Pt. 7) are not fulfilled the amount of profits or gains from transfer of capital assets or intangible assets by the predecessor private company or unlisted public company to the successor LLP shall be deemed to be the profits or gains chargeable to tax of the LLP in the previous year when the conditions are not fulfilledW.E.F.1st April, 2011(i.e. A.Y. 2011-12)

Immovable Property received for inadequate consideration can not be your income

Credit of MAT not allowed to converted LLP

TDS limit on winnings from lottery/Crossword puzzles raised from Rs. 5000 to Rs. 10000

TDS limit on Fees for Professional or Technical Service raised from Rs. 20000 to Rs. 30000

Interest rate for late payment of TDS increased from 1% to 1.5% pm

TDS certificates again to be furnished

TCS certificates again to be furnished

Application to Settlement Commission only when the additional tax exceeds Rs. 50 lacs

The High Court may admit application against refusal by tribunal even after 6 months, if satisfied with the cause

The High Court may admit appeal against Appellate Tribunal Order even after 120 days, if satisfied with the cause

Penalty now may go up to Rs. 1.50 lacs for failure to get accounts audited